The Rising Sun flag, a symbol of Japanese militarism, has a similar perception and meaning to the pattern of the Hakenkreuz, the symbol of Nazi Germany, in the Asian region. However, the Japanese government does not prohibit the use of the Rising Sun flag and it has recently been used frequently, denying reflection on war and colonial rule.

However, recently, a Korean company has received a lot of attention by announcing that they will buy the Japanese Rising Sun flag, the symbol of Japanese imperialism. This is the Korean fashion company Lakai Korea, which has been continuously showing the historical truth about Korea and sponsoring Dokdo, which is disputed with Japan. 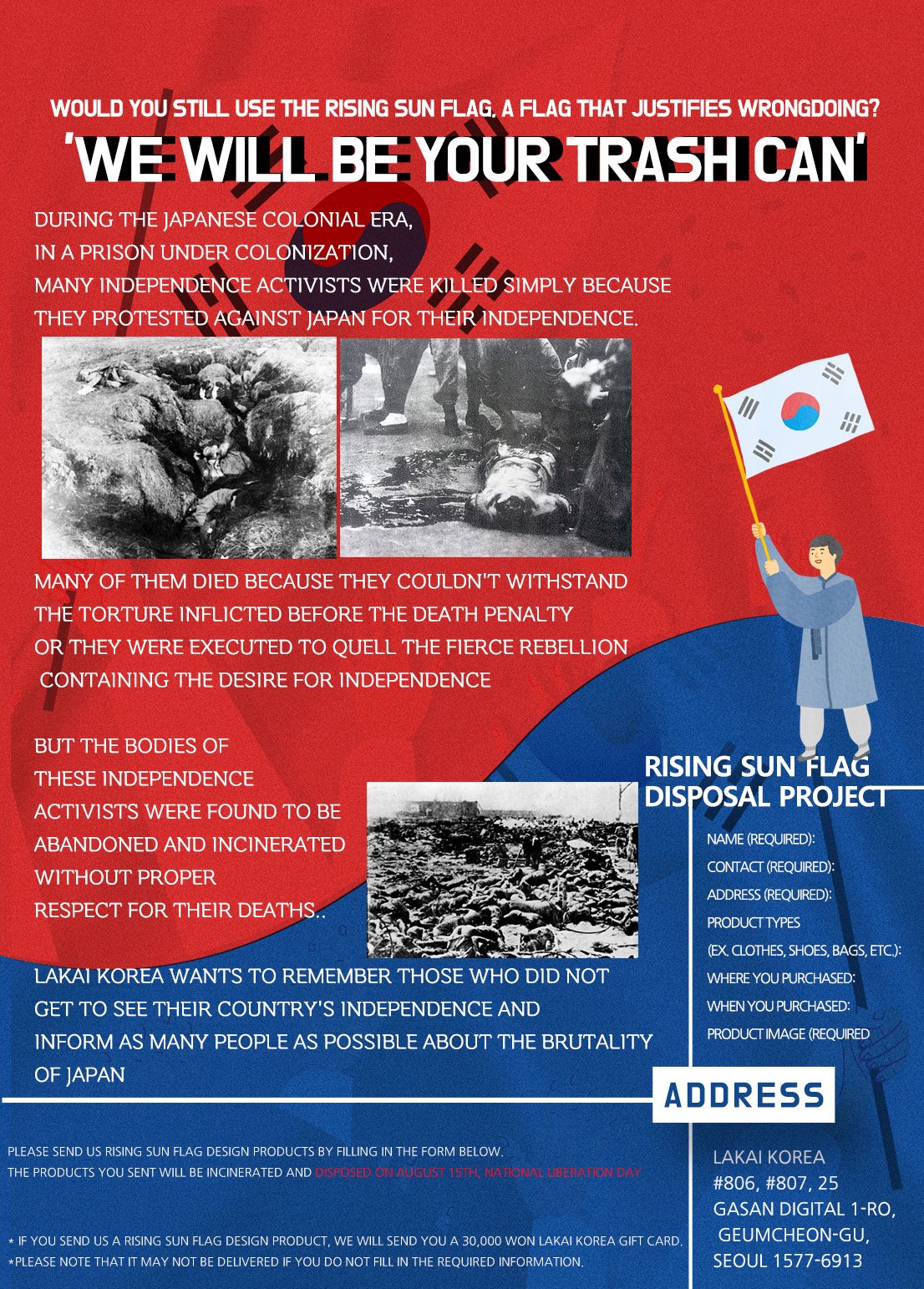 Because of this, the announcement may have shocked many people at first glance, but many Koreans are rather supportive of the company’s decision to buy the Rising Sun flag. The company wanted to spread the truth about the Rising Sun flag, a symbol of Japan’s cruelty.

They were recounting history, when many independent activists in Korea had been killed and executed in the name of fiercely fighting Japanese torture.

“We will be your trash can”
This is the company’s slogan, used to inform others of the brutality of Japan, for celebrating ‘National Liberation Day’ on August 15, Korean Independence Day.

They expressed their ambition to dispose of the Rising Sun flag, the use of which should be avoided.

This project announcement has been translated into four languages and has been uploaded to global sales sites, making it public worldwide.

Japan committed numerous brutalities during the colonial period of Korea. There is clear evidence of the sexual slavery of the Japanese military, the ‘Maruta’ incident in which they massacred and experimented on numerous human beings, and ‘Seodaemun Prison’, where independence activists who sacrificed for Korea’s independence were brutally tortured

Ryu Gwansun, the leading character of the March 1st Movement, the symbol of the Korean Independence Movement, and the most respected, was also imprisoned in the Seodaemun Prison and died due to the aftereffects of torture. Ryu Gwansun was only 18 at the time.

Celebrating Korea’s upcoming national holiday, National Liberation Day, Lakai Korea revealed their will to honor the independence activists who devoted themselves to their country’s independence by burning the Rising Sun flag.

Lakai Korea has been continuously spreading the real history of Korea since its launch in 2017. They said that the Rising Sun flag incineration project will not be short-term, but a long-term project that will last more than 20 years. In addition, they said that, as the Rising Sun flag products are incinerated, the history of Korea will be corrected and the positive effects of historical truth will be widely known.

However, at the corporate level, Lakai Korea receives no benefit from purchasing and burning the Rising Sun flag. The company has previously engaged in numerous activities irrespective of company profit, such as the free sharing of Taegeukgi-related products.

A company that intends to be a means to remove the symbol of evil acts, not just to inform others of the painful history of its own country I think it’s the most Korean-like company because it shows the Korean spirit of independence and passion.