India has been the hub for all the spice trades that have been happening since the mid-15th century. That is why India is called the ‘Spice Bowl of the world’.

However, to understand India’s love affair with spices, we should see an average home, where hand-ground coarse spices, a yesteryear tradition, still contribute to the taste pallet. These hand-ground spices, colloquially known as “Khada Masala” were in their own right, a scientific marvel. Masala being processed at a low temperature, the volatile oils remain entrapped in the spices, which helped preserve the taste and aroma. Indian Homemakers would labour for hours to get the composition just right.

This process changed in the 20th century when mass-produced and inexpensive spices flooded the market. It led to a tradeoff for taste with convenience. These spices are produced under intense heat, excessive grinding, which causes the volatile oil to evaporate, the aroma to weaken, and the taste to decline. It is due to mechanical processes which lead to the grinding of masalas. The result is a spice that is fine in texture but lacking in taste. 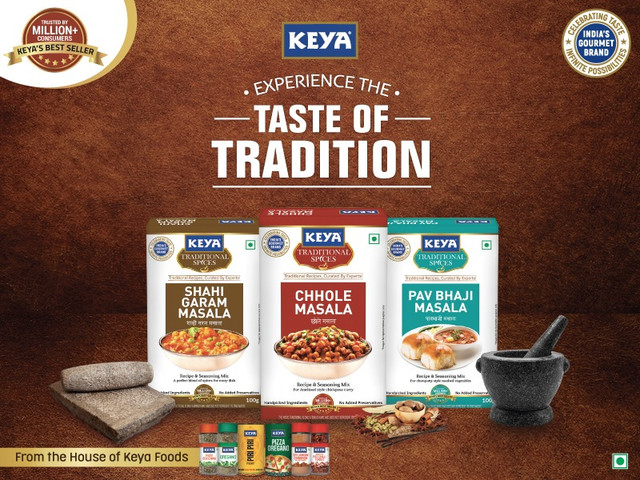 Earlier a norm, now a novelty; hand-ground spices are becoming rarer day by day. Keya Foods aimed to reverse the trend and bring the long-lost traditions back to life. Their research team travelled and documented the places where the tradition is still kept alive to learn the recipes from the masters. The masters and Keya also ventured into people’s homes to understand the recipes and what makes them tick even when more accessible options are available.

Armed with a treasure trove of information, Keya’s team of blenders and expert chefs went back to the drawing board to find the perfect blend of spices which reeks of nostalgia and flavour. After months of trials and experiments, Keya has found the perfect combination of spices and is proud to present its best creation – Veg Dum Biryani Masala.

Biryani is in its own right a unique dish, as with every other spoonful, you experience a different taste ranging from sweet to spicy, all in one bowl. It is possible due to the layered spice preparation, which coats the top, middle, and bottom of the biryani. The problems faced by many biryani cooks and specialists are the long gestation time needed to cook the dish. An average biryani needs to use 2 to 4 masalas which is one of the root causes for its laborious nature of the dish.

With its modern technologies and age-old sensibilities, Keya has solved this problem and thus created a spice blend that can coat all the different layers with just one masala packet. Less effort in preparation and better taste with every bite has catapulted Keya Veg Dum Biryani Masala to become everyone’s favourite.

After its soft launch on e-commerce channels like website www.keyaspices.com, Amazon Pantry, Big Basket, Grofers, and Flipkart, feedback from the consumers bolstered their confidence. Thus, Keya introduced its masala range, which will be a permanent fixture in the spice shelf throughout the nation when once used.

With tons of buyers sharing their Kuch Swaad Aaya Kuch Yaad Aaya moments with Keya’s Spices on Instagram and Facebook, this marks the plans to tap the conventional media moving forward with the campaign. For delicious and authentic recipes, visit their YouTube channel today.